Melbournian punk rock group Gold Class kicked up a raw and real band night at the Grace Emily Hotel on Thursday night. The four person punk unit follow the feel of a traditional band, containing a vocalist, electric and bass guitar, and drummer. Gold Class hit up Adelaide as a part of their Australia and New Zealand tour to promote the release of their new single ‘Twist In The Dark’, the first song taken from their upcoming second album.

This gig showed how well a venue can compliment an artist, as the funky sentimental and strange décor of the Grace Emily hotel, combined with Gold Class’s raw lyrics and sub-minor chords managed to create some intense vibes for eager fans. Drummer Mark Hewitt led with the legendary drumstick count-in, adding a rustic feel to the music and generating a chilled natural stage presence. The group all listened to each other massively throughout their set, showcasing their musicality, while also individually feeling the groove in their own music and being off in their own little world.

You could tell the fan-filled audience was enjoying themselves, as pitch perfect vocals from Adam Curley resonated throughout the Grace Emily. Gold Class kept the crowd jigging and bobbing their heads all through their performance as they smashed out their new single ‘Twist In The Dark’.

Watch out for the release of album #2 later this year! 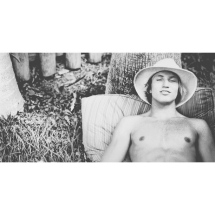